Football coaching – are we missing the street?

When watching TRULY great players in any sport have you wondered how they seem to be able to recognise and assess a difficult situation, and respond quickly with the correct decision? This immediacy of judgement is neither luck nor a divine gift – it’s been acquired from learning their sport in a practical, realistic way. 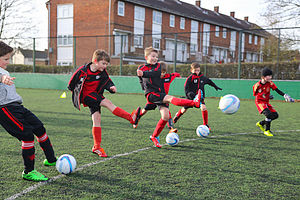 The development of TECHNIQUE is important in sport. But it should be introduced from childhood to include realistic practical situations, in order to develop SKILLS. In football, it’s the subtle use of space (different area sizes) and player numbers (adjusted for age and ability) that, in practice, provides the time/space factor. It’s the transition from unrealistic, non-interference Technical (drill) practises into controlled but realistic, interference (skill) playing situations that is, in my opinion, how the ingredients of playing greatness are acquired.

In all occupations, the ‘hands-on’ approach to learning is a major part of skill acquisition. In the past, when apprenticeships were common in industry, commerce and sport, students learned their trade from the ‘ground/upwards’. In football, the street provided the apprenticeship environment – it was, in effect, the footballers’ classroom. It was here, in the street, that space and playing numbers provided the pressures that developed the skills of the game. Today in football, since the demise of the natural street-learning period, misapplied teaching and learning theories have produced a ‘sameness’ of playing ability and a loss of individualism.

I have watched most of the world’s great players during my lifetime. It seems clear to me that all have benefited from repetitive, realistic football practice. A first-class example of a present day, TRULY great player is LIONEL MESSI, who, like other greats of the game, has compiled a mental database of football situations from childhood upwards. Realistic practice time has provided an ability to ‘play in the future’ allowing early recognition of situations and the ability to employ the ‘immediate football skills’ required.  These ‘situation signals’ have become second nature to him, and they allow him to select the correct ploy to use —either to play simply or to use skills to exit the situation. Or, of course, to exploit some other situation he’s noticed, but others have missed.

Personally, and in all my London football skills coaching courses, I heavily promote the use of REALISTIC PRACTICE methods for many decades and Messi, like so many other great players, are wonderful examples of —PRACTICE WHAT YOU PLAY.  Realistic practice involves the ‘chaos’ aspects of the game, encouraging individual flair and exciting team-play. The over-structured coaching methods adopted for decades by our academic football overseers has prioritised organisation and practical ‘tidiness’. This, unfortunately, has produced a game of ‘robotic sameness’ in the football we see here today.

Through continually ‘practicing what you play’, players can acquire a ‘sixth sense’- a ‘playing in the future’ quality that can lift them from the ordinary to the great. The apparently instantaneous ability to react quickly and decisively to situations occurs simply because players are prepared early to react to situations — because they have been in these situations many, many times before and can instinctively utilise the necessary skills for the job. This is exactly the kind of instinct we look to develop with our unique methodology of our London football coaching courses.

I believe over the years we have had a very large number of talented players capable of providing our game with excitement and success. But virtually all of them have fallen by the wayside through their involvement with poor development methods. This is still the case, and I see no light at the end of the tunnel. Unless we restructure our thinking on player development, and the standards required for player and team improvement, we will continue to fall further behind in world football status.

In our London Academy football skills coaching courses, we adopt a methodology that’s very close the street game. A methodology that encourages independence, creativity and decision-making. We have structure, too, of course, but the emphasis is on maximising skill, and using it – not coaching it out of players.