The idea for this post comes from the excellent keeptheball.wordpress.com I have added diagrams and stats on current free kick success rates in the EPL. 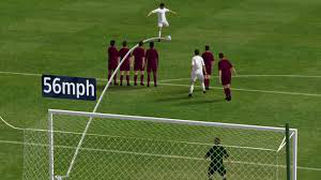 For many years now, the basic tactical setup for defending against a free-kick – both from central and wide positions – has been more or less the same. The idea is to create space between the ‘keeper and his defenders, to give the ‘keeper a clear sight of the ball, and prevent attackers from positioning themselves too close to the goal. It’s true that there are small variations to this, mainly in the number of player used in the ‘wall’ and its shape, but – essentially – that’s about the full extent of But aspects of the game are changing. And perhaps our attitude towards defending free kicks should change with them. For example,  recent years have seen the introduction of footballs that are more prone to dips and swerves; lightweight footwear gives players more ‘fedefensive tactics when it comes to free-kicks.

But aspects of the game are changing. And perhaps our attitude towards defending free kicks should change with them. For example,  recent years have seen the introduction of footballs that are more prone to dips and swerves; lightweight footwear gives players more ‘feel’ on the ball; and (as recently as last season) we saw referees begin to use foam markers to ensure the proper distance between the ball and the nearest defending player(s) — bringing to an end the ‘cheating’ by defenders by attempting to close down this space.

But defensive structures haven’t responded to these changes, and – as a result-  the goal has become more vulnerable. Direct, frontal free-kicks (18-36 metres from goal) have become more ‘stomach-churning’ for players, football coaches and supporters, who often see the ball fly over or around a ‘wall’ into the half of the goal left unprotected by a stranded ‘keeper. Similarly, defending free-kicks from wide positions has become equally difficult, as in- and out-swinging free-kicks, hit accurately and with pace, can cause immense problems for defending players, ‘keepers in particular. Another problem is free-kicks given more than 10m from the bye-line, which result in a relatively large space between the ‘keeper and his defenders. This space has become a significant target for attackers, forcing defenders to run toward their own goal under pressure from opponents. This, in turn, gives rise to a mixture of defensive problems, such as fear of turning the ball into their own goal, allowing attackers to get to the ball first and the risk of collisions between the ‘keeper and his own defenders or opposing players. And that’s not to mention the risk of the ball defeating everyone and lodging itself in the far corner of the goal! In short, defensive space at free-kicks has become an important tactical issue that nobody seems to discuss or have ideas about. These defensive spaces have become less of a tactical plus and more of a dangerous and mistake-ridden zone.

So the question arises – how should teams adjust to cope with these new defensive vulnerabilities? How can they tactically prepare themselves to cope with the defensive weaknesses caused by recent changes in the game? There is no definitive answer to these questions, but a good first step would be to encourage football coaches at all levels, and especially at a youth football or junior football level, to make students aware of the issues, and then to help them think about the best defensive tactics and positioning.

Although the most effective defensive tactics are a matter of experimentation,  the main objective should be to ‘block off’ the goal itself and the route to it as much as possible. Several factors will contribute to doing this effectively. 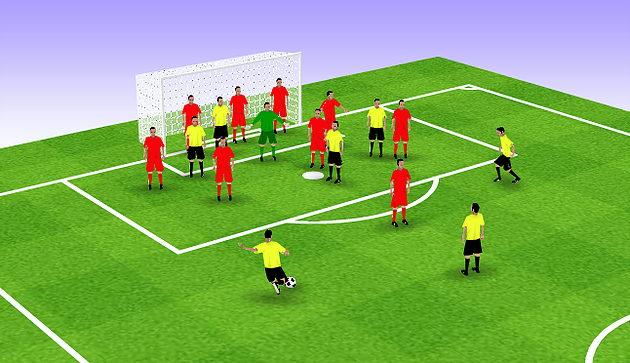 Of course, even with the above, opposing players would be able to take up positions closer to the goal, and there’s always the chance of ricochets, blocking off etc., just as there are now.  But careful thought with regard to ‘blocking the goal’ and defensive positioning in the penalty area would drastically reduce defensive gaps against direct shots and floated aerial deliveries. It would also allow defenders to ‘attack’ the ball, if necessary, from both wide or frontal free-kicks, rather than find themselves having to ‘scramble’ back towards their own goal - as is too often the case with present defensive methods.

These changes are at least worth a try. After all, no-one, it seems, has come up with any other approach that might stop goals from free-kicks becoming more frequent. It would be a great exercise for football coaches at all levels, from kids’ football and football beginners, to youth and senior football, to experiment with defensive positioning against different attacking options, to see if a better defensive ‘guard’ can be developed.

Assessing distances from goal will be helped by the way the grass is cut these days. At most grounds, whether they’re public parks or major stadiums, the grass is often cut in 6m lengths across the field. The penalty area has three cuts to cover its 18m, and the cuts continue upfield in 6m lengths. The new re-positioning of defenders at free-kicks against from frontal and wide positions should be tested up to a distance of 36m (about 6 cuts) from the goal. Free-kicks, frontal and wide beyond 36m from goal, should have some space between the ‘keeper and his defenders, but not so far out as at present (12m should be a sufficient distance from goal). This would reduce the mad scramble back by defenders and allow more opportunities for them to come forward to attack the ball. This extra distance of free-kick deliveries against also gives ‘keepers more time to deal with deliveries from this range.

Would it work? It’s open to debate, but unless football coaches spend time experimenting with changes to the present approach, we won’t find out. And unless football coaches show more willingness to adopt – or at least try - new ideas, we’ll remain in the ‘backyard’ of world football. If you’re interested in joining a football coaching environment which is not only aware of the subtle changes in the game over the past few years, but which actively incorporates football coaching techniques to address them, you should consider attending our centre for kids’ football in London, the London football academy. With highly experienced and fully qualified football coaches, this academy caters for all ages and abilities, from football beginners to seniors, and is one of the most respected football skills coaching centres in the UK.

Find out more at www.premierskillsacademy.com .